Misoprostol and its various usages 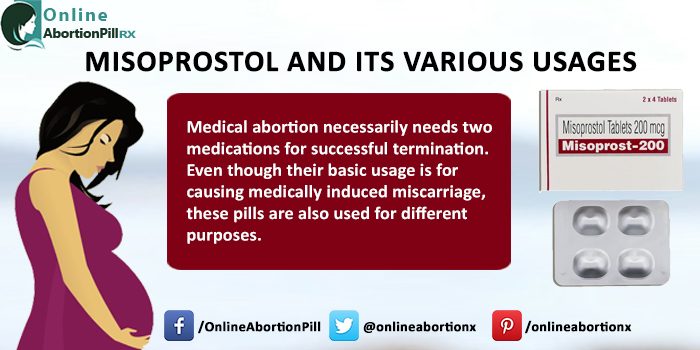 Medical abortion necessarily needs two medications for successful termination. Even though their basic usage is for causing medically induced miscarriage, these pills are also used for different purposes. When you buy abortion pill, the secondary drug is called Misoprostol. It is a synthetic prostaglandin E analogue that is not only used for its intended purpose but also for off-label usage of indication in gynecology and obstetrics, inducing labor, treating stomach ulcers, ripening of cervix and medical management of miscarriage and treating hemorrhage after childbirth.  Additionally it is also listed as an ‘essential’ medicine for women’s health by World Health Organization. History                              The U.S FDA approved medication for pregnancy termination in 2000 with 600 mg and 400 mg of Mifepristone (Mifeprex) and Misoprostol (Cytotec) respectively. Before the recent amendment, the FDA required prescription of three pills of Mifeprex and two tablets of Misoprostol. Additionally, pregnancy cancellation medicines were only used up to 49 days of gestation. After the recent update on labeling, FDA now requires 800 mcg dosage of Misoprostol, i.e. four tablets of 200mcg dosage. This drug can be used orally (under the tongue), buccally (in the cheek pouches) and inserted vaginally. Generally, used orally before FDA update, now... View Article

Restrictive Laws Prevent Women from Getting a Safe Abortion

Just few days ago, a woman was arrested for seeking illegal abortive service for her pregnant teenage daughter in a place where it is illegal to have an abortion that is not a result of rape, incest or has any potential life-threatening risk on the woman and the child.  After buying abortion pills online and inducing the miscarriage by medicines she was reported by the clinic staff that did her daughter’s after checkup. Just in three days process, she gave her daughter Mifeprex and Misoprostol pregnancy cancellation pills as per instructions without any problematic side effects. Four days later she took her to have an ultrasound and it was clear that she was not pregnant anymore. As pregnancy cancellation pills have the same effect as miscarriage, initially no one aside the two knew that it was medicine induced. Concerned mother confided them about pills used just in case it didn’t cause any harm to her daughter. This case brought forth the ugly side of getting abortion in regions that have major anti-abortion perception population. Even in this case, where the girl was not even eighteen years of age would be forced to carry the pregnancy to term, where she as... View Article

Early pregnancy termination: what do you do?

Having the abortion in early days of pregnancy is the safest option comparatively. As the pregnancy develops, it gets more complicated for it to be aborted. Therefore medical pregnancy termination or other early procedures have the highest success rate without any complications. One of early termination procedures includes medical abortion. This is a type of procedure that involves taking abortion pills within 10 weeks of gestation. For women seeking medical abortion, it is necessary to go through a sonogram to confirm if the pregnancy is viable, and to date the pregnancy.  If you are detected to have ectopic case, ovarian mass, corticosteroid use, anemia, bleeding disorder, IUD, Kidney problems, blood pressure problems or liver/heart disease, you will not be eligible to do through medical termination. Afterwards, if you decide to go through the process; primarily you will need to buy abortion pill to start the process.  There are many abortion pill regimens that you can choose from, some of them are – Mifepristone and Misoprostol These two are also available in one pack called MTP Kit which also acquired through the net. The schedule for this is as follow – On the first day you will be given Mifepristone. (Most don’t... View Article

Getting a First-Trimester Abortion in Less than Few Dollars

As indicated by healthcare research, 60 percent of all conceptions were finished early are a direct result of neglect of contraception or the absence of it, an unintended pregnancy or unwillingness to proceed with the same. With teen pregnancy a typical issue, the inquiry is-what is the best technique to end pregnancy at home? The abortion pills suit females in 10 weeks gestation or less to get pregnancy finished in security, without surgery or anesthesia. The medications are a less expensive substitute to surgical technique and guarantees expel of pregnancy in first-trimester. Moreover, medical pregnancy ending is done at ease of home, and woman can do it in privacy or seek assistance. It is woman’s personal freedom that the surgical treatment may not ensure every time, though both the pregnancy ending methods have 98 to 99 percent success rate. How to Get Drugs for Medical Abortion? Given different confinements on pregnancy end, it is not astonishing that women are substituting drug or surgical treatment with more unsafe and unlawful method for removing conception parts. These are finished by untrained experts or done at back-alley, where the individual can’t make certain the treatment is going to be successful, harmless or incomplete.... View Article